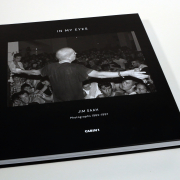 My new book is out! Here’s a description from the press release. I hope you enjoy it.

“Jim Saah’s photography of the Washington, D.C. music scene is incomparable. Not only was he there but he completely got it.”

“I remember being really struck by your pictures of Fugazi when I first saw them. I had seen plenty of other photos of us that were perfectly good representations, but your work often would look like the way I felt on stage.”